One of my patients asked me for my opinion on whether ‘blue-blocking’ lenses will help reduce the eye ache he experiences when working on his computer screen and smart phone. What should I tell him?

Blue light in the visible spectrum, wavelengths between 400nm and 500nm may cause eye fatigue, dry eye symptoms, prevent good sleep and damage the photoreceptors of the retina. The screens found on tablets, computers and smart phones emit a lot of blue light. It’s what makes the screens produce such high contrast images. Eye strain associated with using these devices in termed digital eyestrain.

In a recent study, special lenses which blocked 99% of blue light and a grey tinted lens that produced the same screen luminance as the blue-blocker and blocked around 50% of blue light were compared for their effects on digital eye strain.

The effect on digital eyestrain was about the same for the special blue-blocker lens and the grey lens.

Other studies have also failed to prove any benefit of special blue-blocking lenses on digital eye strain. 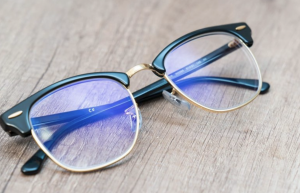