I’m setting up my own practice. It’s my first and although I’m pretty sure what general equipment I need, I’m really unsure what near visual acuity test I should buy. What should I do?

It is confusing. There is a range of near vision tests. In my practice, I use the Faculty of Ophthalmologists near reading print chart and note the patient’s preferred working distance in the clinical records. However, I think I should invest in an M notation chart. I’ll speak more about this towards the end of this piece.

Some people use the Jaeger chart and not the near visual acuity in J numbers. However, J numbers have no precise meaning. The lack of external definition of Jaeger numbers makes them extremely variable. One study found that the size of J numbers varied from chart to chart, that is, for example, J4 in one version might be smaller or larger than J4 in another version. It is better not to use Jaeger charts for measuring near visual acuity. 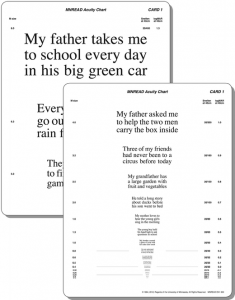 EyeTools-use it to get even better at what you do. Get the edge and be better than your competitors.