I have just examined a 25-year-old male who has recently been diagnosed with cone dystrophy. He asked me what would happen to his sight as he got older. I wasn’t sure what to say.

The symptoms are photophobia (discomfort in bright light), loss of detailed vision, difficulty distinguishing colours, and central sight loss. Symptoms are the same in both eyes but the peripheral vision is usually unaffected. Some people develop rapid, uncontrolled eye movements (nystagmus) or find that their eyes ‘drift’ or wander.

There are two groups – stationary and progressive. In stationary cone dystrophy symptoms tend to remain stable throughout life and are usually present at birth or early childhood.

In progressive cone dystrophy, symptoms become worse over time. The rate of progression and age of onset, however, can vary greatly from one person to another. Progressive cone dystrophy usually develops in late childhood or early during adulthood. In many cases, vision may deteriorate so that a person is considered ‘legally blind (i.e., vision that is 6/60 or worse). Complete blindness is uncommon in individuals with cone dystrophy. Side (peripheral) vision is usually unaffected.

Individuals with cone dystrophy can usually see well at night or in low light situations because the rod cells are usually unaffected. In rare cases, late in the disease course, some rod cells may become involved.

The retinas of people with cone dystrophy may look normal, even once they begin to lose their sight. The most useful test is an electroretinogram (ERG), which measures the retina’s response to flashes of light. The test is done twice, once in a well-lit room and again in the dark. If electrical activity is recorded in the retina in the dark but not in the light, it suggests that the cones are no longer working. 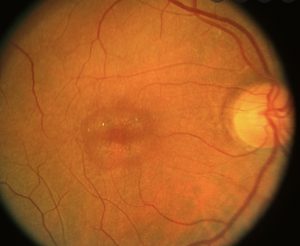