I noticed a small pigment clump in my 35-year-old female patient’s left eye. She is a new patient in my practice. She has had her eyes examined before and none of the previous eye specialists had mentioned it to her. It looked flat. I took a photograph for the records. What should I do?

I have reviewed the photograph and can see the pigment clump about one disc diameter below the disc. 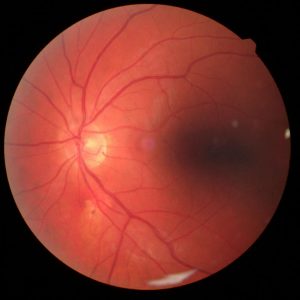 A focal accumulation of pigment in the retina is sometimes called an eye freckle. This sounds very benign and for most people, it is and remains so. However, it can grow into a malignant choroidal melanoma. It, therefore, has to be monitored (photographed or drawn, and described in words in the clinical records) on a one-year basis so any change to size or shape, or appearance can be detected at the earliest opportunity, with referral to an ocular oncologist.

Two years later the patient returned for a routine examination and the pigment clump was now a large green-grey lesion about two-disc diameters in diameter. She was referred and the diagnosis of choroidal melanoma was made. The tumour was much larger and more difficult to treat than it was two years previously. There is also a concern about secondary tumours in the liver.