This sounds like xanthelasma. They are yellow deposits of cholesterol underneath the skin usually on or around the eyelids. The deposits have obvious edges. In themselves, they are not harmful or painful but may cause the person problems because of their appearance and the perceived negative effect on cosmesis. 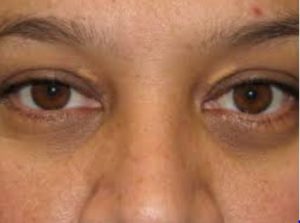 Some studies suggest that there is no link between xanthelasma and the type of cholesterol that causes problems with the cardiovascular system, however, a well-conducted study in Denmark found that people with xanthelasma had a:

Your patient deserves to be referred to their general practitioner for a blood workup and a full cardiovascular risk profile assessment to include age, BMI, smoking, diabetes, blood pressure, and any family history of cardiovascular disease.