It sounds to me that you have seen a Hollenhorst plaque. According to some textbooks, this is a common finding in older people. That’s not my clinical experience as I have examined hundreds of older people and never seen one. These plaques are also known as retinal emboli. A plaque is a small, abnormal patch of tissue on a body part or an organ. They may also be a build-up of substances from a fluid, such as cholesterol in the blood vessels. 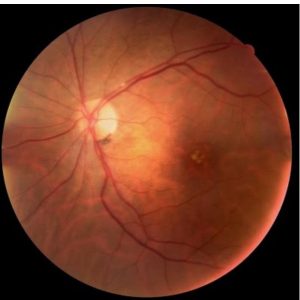 The phenomenon is named after the American ophthalmologist Robert Hollenhorst who first described their significance in 1961.

People with a Hollenhorst plaque are visually asymptomatic and present with retinal emboli that has broken off a plaque in the internal carotid artery. When the embolus breaks off a plaque in the internal carotid artery it flows in the blood vessel system upstream until it becomes too big to pass any further along the vasculature, it stops moving and blocks the blood vessel. Unfortunately, if this happens in the central retinal artery then there is a catastrophic and usually permanent loss of vision.

A Hollenhorst plaque is a sign of severe atherosclerosis. The most important step in management is to identify and treat the originating plaque to prevent further embolization.

Your patient deserves to be referred to the general practitioner for a full blood workup.