One of my patients complains of dry and watery eyes, gritty eyes and thinks her eyes are more ‘sticking out’ than in the past. She is 35 years old and denies any general health problems although she has noticed she is losing hair from her head. She is not taking any medicine. What is going on?

Autoimmune thyroid disease is associated with, but not the direct cause of TED. Antibodies are produced which target some of the fibroblasts in eye muscles and/or orbital connective tissue within the ocular orbit. Inflammation causes swelling and/or scarring that is likely to push the eye forward resulting in a bulging appearance. This swelling also causes problems with eye movement which can lead to pain on eye movement and double vision.

Along with dry and watery eyes, staring or bulging eyes pain on eye movement and double vision here are some other eye problems associated with TED:

Your patient should be referred to her general practitioner for blood tests to determine levels of circulating thyroid hormones. 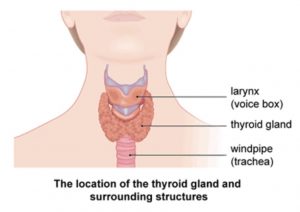