The retina, and in particular its photoreceptors are constantly bombarded by light, and in our younger years, they are happy with this. But over time they become damaged, especially by the short-wavelength blue light found in sunlight.

The retina is protected from sunlight damage by macular pigment. However macular pigment isn’t made by the body and has to be obtained from a healthy diet rich in foods like kale, spinach, sweetcorn and goji berries or from diet supplements (tablets). If the retina doesn’t get the nutrients available from these sources the photoreceptors will become damaged, die and poor vision will result.

These foods have high levels of an antioxidant called lutein. Which is a major constituent of macular pigment. The more macular pigment a person has in the retina the less likely they are to develop macular disease.

Kale, a green leafy vegetable, is packed with lutein: 100 g will provide about 40 mg of lutein. The recommended daily dose of lutein is 10 mg. I make sure I have at least two 100 g portions of kale per week.

A caution about eating excessive amounts of kale. It contains something called progoitrin, which can interact with thyroid function if it’s eaten in very high amounts. Thyroid hormone synthesis can be interfered with and the iodine the thyroid needs to function is blocked. This can result in fluctuating blood sugar levels and weight. A person would have to eat an excessive amount of raw kale to experience these negative effects. A person who is unsure, or who has an underactive thyroid (hypothyroidism) already, should ask their general doctor or a dietitian for advice.

Also, kale is very high in vitamin K. It is described as the clotting vitamin because without it, blood won’t clot properly. If a person is taking blood-thinning or anticoagulant drugs, like warfarin (brand name Coumadin), they should avoid large amounts of kale.

If you struggle to find or prepare kale a supplement could be considered with at least 10 mg of lutein in it.

Even if a person already has age-related macular disease, research evidence shows that eating kale may help maintain remaining vision.

Eating five portions of different fruit and vegetables is not just good for general health, its good for eye health as well. 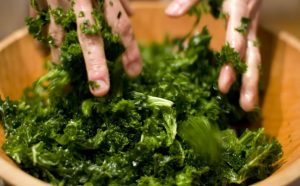