When I was at optometry school, we were encouraged to dilate our patients whenever it was clinically the right thing to do. Small pupils-most of our patients were old or very old so small pupils were common-lens opacities, symptoms and/or signs suggesting age-related macular degeneration and symptoms and/or signs suggesting retinal tear and/or retinal detachment.

We were advised that dilating pupils could close the anterior chamber angle leading to acute closed-angle glaucoma, so before instilling dilating drops we had to:

It is fair to say that many of us students were fearful of dilating patients because we thought closed-angle glaucoma was imminent and that this fear continued into our professional practice.

When I left optometry school and went to continue my clinical training in an eye hospital things were different. I estimate that around 90% of the patients examined there in any one day were dilated. In fact, one of the mantras that the senior ophthalmologists quoted was ‘never give an opinion on an undilated eye’. However, the approach to dilation was much more cavalier than my experience in optometry school. Many patients routinely had Goldmann tonometry undertaken prior to dilation as part of the standard examination but there was no van Herick’s test and no post-dilation intraocular pressure test.

When I asked one of the senior ophthalmologists about this was he responded by asking me to look at the hundreds of people waiting for an examination and asking me how much longer they would have to wait if his team conducted unnecessary tests. He added that if they caused closed-angle glaucoma by dilation then they were doing the patient a favour. Better to close the angle in an eye hospital than it closes when the patient is at home and waits several days before seeking help.

It is also interesting that patients waited for one to two hours for an examination after having had the dilating eye drops giving some time for the intraocular pressure to rise and the symptoms and signs to alert the clinic staff that something was wrong.

In primary care practice, in my experience, patients are not kept waiting this long and even if they have been dispensed glasses they will be on their way home or already be at home within an hour of being dilated. Symptoms and signs are more likely to start when the patient has left the practice and therefore it is important to warn the patient of the signs and symptoms of closed-angle glaucoma and what to do should they arise.

Here are the details for the van Herick technique.

The angle can be graded as follows: 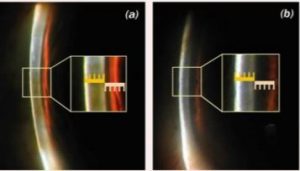