One of my patients is a police officer. She told me that some of her colleagues had a laser from a laser pointer shone into their faces when making an arrest. She is worried that she may suffer serious eye problems if she is attacked in a similar way. What advice should I give her?

It is highly unlikely that your patient or her colleagues will suffer any serious eye damage if an assailant shines a laser pointer at them.

When I was at optometry school there as a story in the local newspaper about a bus driver who was claiming financial compensation for allegedly having a laser pointer beam shone in his eyes while driving a bus. He was claiming that he could not see and that he could no longer drive. At the time, I remember thinking that whoever shone the laser beam must have a very steady hand and be good at aiming in order to get the beam into the driver’s pupil while he was some distance away in a moving vehicle. Even with my basic eye knowledge at the time, it sounded like a case of malingering. In other words, pretending not to see for financial gain.

Laser pointers produce a narrow beam of light in which all of the light waves have very similar wavelengths. The laser’s light waves travel together with their peaks all lined up, or in phase. This is why laser beams are very narrow, very bright, and can be focused into a very tiny spot. Laser pointers put out a low level of power, which would only damage the retina if the beam was incident on the same part of the retina for at least 10 seconds.

Read the next sentence as if you were reading it out loud: one and two and three and four and five and six and seven and eight and nine and ten. That is 10 seconds. Firstly, it is difficult to shine a narrow laser beam into someone’s pupil and secondly, I can’t see how your patient would keep still enough for the beam to be incident in one part of the retina for 10 seconds.

I live near an international airport. There have many reports of people on the ground aiming laser pointers at arriving and departing aircraft. This is not something that should be done but again the person on the ground would need to get the laser beam into the cockpit and into the eye of the pilot in an aircraft several thousand feet away and moving at around 160 miles per hour. The government office responsible for transport has put out information to dissuade people from doing this. While I understand why this information has been put out one of the figures produced is incorrect. It shows a beam of light, supposedly a laser beam, that is diffusing. While laser light does diffuse, it is so slight that it would take a very long distance for it to diffuse.

I have read articles on laser pointer safety which state that a person can experience flash blindness when exposed to the laser beam. Light from a laser pointer overwhelms a person’s eyes, causing temporary blindness, similar to the experience that people get when the flash on a camera goes off. I do not see how this can be accurate. A camera flash produces a bright light of many different wavelengths. The whole eye is filled with a lot of light in an instant and all the photoreceptors are flooded with light. The chemical reactions necessary for producing vision are overwhelmed and a bright afterimage is formed. This slowly disappears as the chemicals are remade. I cannot see how a narrowly focussed laser beam can cause this type of retinal reaction.

Thank your patient for doing difficult work on behalf of the community and advise her that she is safe from laser pointer attack. 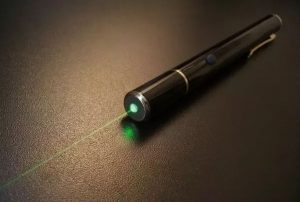 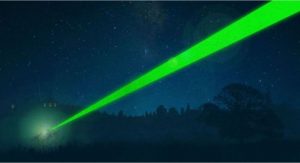